Unfrazzling: Cutting Stress in Half! 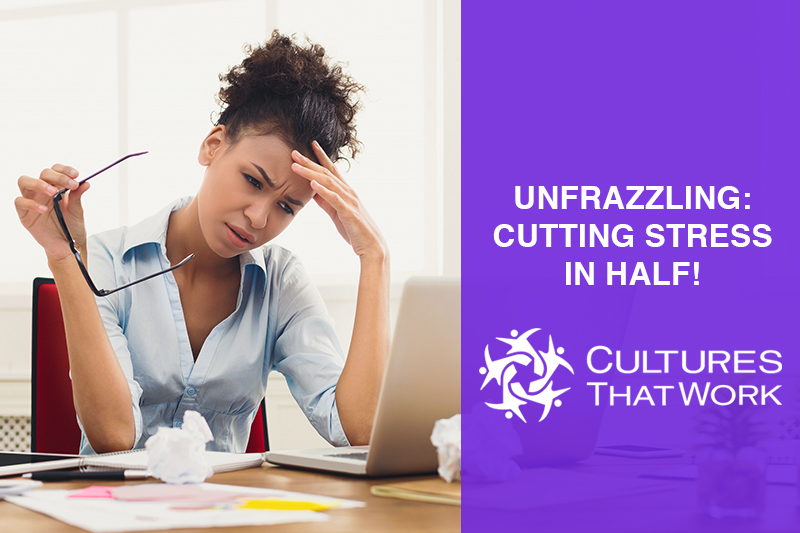 In our last article, we discussed how the work climate impacts business results. According to the research, half of how employees perceive their organization’s climate can be traced to the actions of the leader.

But, what about the other half? What can employees and teams do to create a great climate, especially when they become “frazzled?”

In an article in Science magazine titled “The Biology of Being Frazzled,” “frazzle” describes the neural state of the brain in which anxious emotional upsurges hamper the thinking part of the brain. When “frazzled,” no one can concentrate or think clearly.

The negative emotions of frazzle are contagious and sweep like the flu, hampering team performance. What can employees do—through their own self-leadership—to accept the other half of the responsibility for their work climate and reduce frazzle?

I coached the finance department of a commercial real estate firm. When I sat down to start the coaching session, each person looked weary, frazzled. The team was pressured by the owner to push through complex paperwork and transactions to close deals, often when it was least convenient.

There was unrelenting pressure from deadlines looming for year-end reports, payroll, and the following year’s budgets. Even though the leader expected them to close deals, even when it was inconvenient, they had to drop everything and do it!

That’s the climate of a fast growth firm. Get the deals done. But, in this case, they really liked the owner! Still, they were frazzled.

So I asked them a challenging question: “What if you could cut your stress in half?” They welcomed the challenge.

Conflict situations are threatening and feel personal. Our instinct is to protect ourselves. Therefore, we may react so quickly that we don’t even notice our thoughts. But beneath the surface, a thought process is playing out: a conflict event triggers an automatic, biased, self-limiting thought, which in turn triggers a destructive response.

For example, automatic thoughts such as “I’m not backing down” or “You don’t get it. I’m obviously right” could lead to arguing.

The team practiced being mindfully aware of their breath, regaining focus, and acknowledging the automatic thoughts triggered during conflict, such as “He doesn’t care that I am overwhelmed” and “I’ll never get caught up.” The destructive responses were to brood privately or gossip about the workload.

They discovered a truth for all of us. The drama of conflict and disagreement takes place within our own mind. In other words, most of the conflict is within us, and our thoughts are at odds with each other! We can do something about that! That’s how to cut stress in half!

The team reframed their automatic thoughts. By thinking, “Our leader cares” and “We will cover or have each other’s back,” they practiced de-escalating emotions during conflict. They renewed trust in the leader and now speak up and ask for help when overwhelmed, rather than doubling down on the stress coming from outside of themselves.

That’s how they cut their stress in half!

If you want to get a free consultation without any obligations, fill in the form below and we'll get in touch with you.
317-451-9595
information@culturesthatwork.com